I have spent a total of fifteen months in Zanzibar. On my first visit I lived for just short of twelve months doing charity work in a small village called Makunduchi, in the south of the island, and then on my second visit I stayed for four months.  Zanzibar is a small island just off the coast of Tanzania, with easy access by air or by ferry from Dar es Salaam.  The island isn’t only home to beautiful tropical beaches, but also has an interesting history. 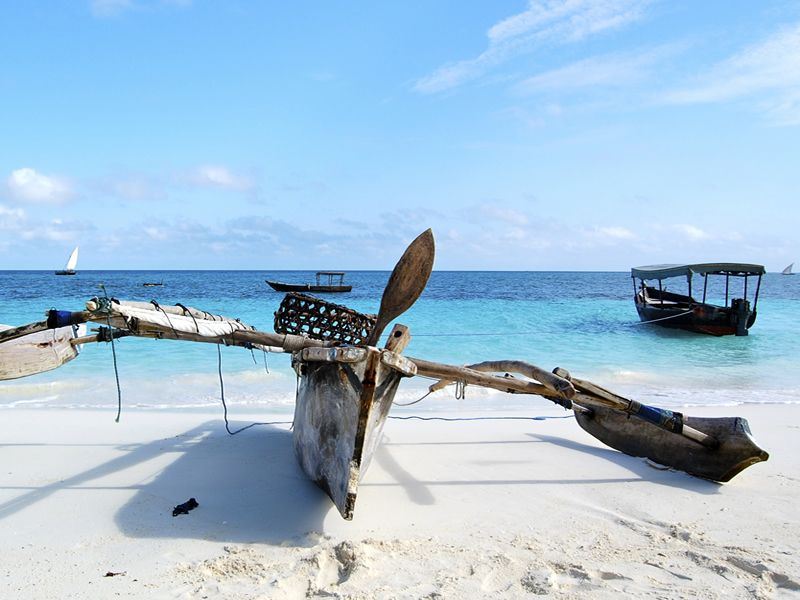 The Arabs settled on the island in 1698 and used the island as a slaving port, sending groups of slavers to the mainland to bring people back to the island to be sold.  This dark history has left the island with a lot of Arabic influences in the architecture, language and the Islamic religion.

Zanzibar only has one town, Stone Town, this is the first place that visitors to the island will experience.  There is a small area of beach here but the main area of interest is the old stone buildings in the center of town.  The narrow maze of streets between the tall stone buildings is home to hundreds of small shops selling carvings and other souvenirs.  To get to the serene beaches from the center of town, you can head north or south.

Traditionally the northern tip of the island is the most popular for beach vacations, in the two villages there, Kendwa and Nungwi.  Kendwa is home to the more luxurious hotels and a beautiful white sand beach, but the hotels are also a little more expensive to reflect the beauty of the area and the accommodation.  After a short walk along the beach you will find yourself in the next village, Nungwi.  This village is where the beach tourism on the island first started, and when you get there you know why.  The beach is beautiful during the day and gives you a perfect sunset over the ocean in the evening.  The main reason I prefer Nungwi to Kendwa, is that the hotels are very close to the village, so if you fancy a more cultural experience you can take a walk through the village and see how the locals live.

As well as having beautiful beaches, hotels, restaurants, jet ski rental, water skiing, and boat rides, there are two attractions which deserve a separate mention.  These are the lighthouse turtle sanctuary and Mnemba atoll.  The old lighthouse is on the northern edge of Nungwi beach and is home to a natural hollow in the rocks which is now used as a turtle sanctuary.  Any turtles which are injured or accidentally caught by the fishermen are brought here until they are healed.  For a small fee you can go into the sanctuary and feed the turtles by hand or hold a baby for a photograph.  Mnemba atoll is home to some of the best snorkeling I have ever experienced, the water is as clear as glass and the variety of sea life there is wonderful, definitely worth the trip which will take half a day and include a BBQ on the beach.

The south of the island is home to a huge crescent shaped beach and two villages, Jambiani and Paje.  This area has become very popular in recent years because of the calm waters of the lagoon, which provide perfect conditions for kite surfers all year round.  There is a wide range of accommodation available, from dorm rooms through to private beach bungalows.  This area also has some good snorkeling and scuba diving opportunities out in the lagoon on the inner edge of the reef, but I would recommend a morning trip to a nearby village called Kizimkazi.  From Kizimkazi you can take a short boat trip out to swim with wild dolphins, it is better to get out there early in the morning when the dolphins are in the shallow water and before the main bulk of tourists get there.

On the road between Jambiani and Stone Town, there is an area of forest which is home to the protected species of monkey, the red colobus monkey.  This is a great place to get some pictures of the monkeys up close; the fact that they have been protected for many years now means that they aren’t so afraid of humans.

Many people who visit Zanzibar will also take a trip to mainland Tanzania to take part in a safari.  The best town to start a safari from is Arusha, in the north of Tanzania; it is possible to get a direct flight from Stone Town to Arusha or to take a ferry to Dar es Salaam followed by local buses (if you have plenty of time).

Zanzibar is one of my favourite places in the world and I would encourage people to visit there, but more than that, I would encourage the people who do go there for a beach vacation, to spend as much time there as they can, travel around the island and take in all that the island has to offer.

Taste of Kenya and Zanzibar