War was said to be every Roman soldier’s favourite pastime. It would have to be, considering the Ancient Romans spent over a thousand years fighting battle after brutal battle to expand their empire. Yet even conquering the majority of what we now refer to as Europe as well as parts of Africa wasn’t enough. The Roman’s love of war was so intense that in around 80AD they built a monumental arena – the Flavian Amphitheater, now known as the Colosseum – and brought the battlefield home, putting war on stage for all to see. 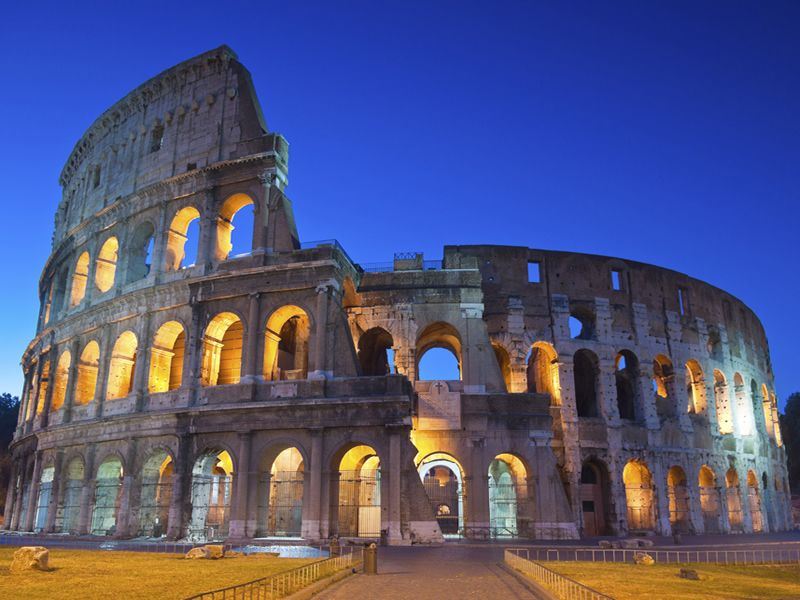 Once capable of seating up to seventy thousand spectators, the Roman Colosseum is now one of the most famous landmarks in the world. A magnificent feat of Roman engineering and design, this spectacular structure took around eight years to build and sits at the heart of the piazza del Colosseo, just east of the Roman Forum.

In Roman times, mass entertainment was much like today. People would sing and dance, act out grand dramas and perform acts of great athleticism for a crowd, but there was no celebrity panel of judges, only an Emperor with the power to execute with a turn of his thumb. The blood lust of the Romans was satisfied within the walls of the Colosseum where daily public executions, animal hunts and the famous Gladiator fights took place. But the floors weren’t always sticky with blood, the Colosseum also hosted religious ceremonies, performances of the Greek tragedies and even simulated sea battles.

Still standing after almost two thousand years of destruction and decay, the Colosseum we see today is just the skeleton remains of what was once the most prodigious arena in the world, but what an incredible skeleton it is. The scale of the Roman Colosseum alone is breath-taking. Built mostly from concrete and stone, the Colosseum is elliptical shape and made up of complex storeys of columns and archways, reaching around 48 meters in height and 189 metres in length.

Even in its ruined state, the Colosseum exudes all of the passions and ideals we associate with the Roman Empire – extravagance, strength, culture and cruelty. I don’t believe in ghosts, but I do believe that certain places in this world can be so deeply steeped in the rich history of their time that echoes of what took place there remain forever. The Colosseum is one such place. Even if you’re by yourself, you’re never quite alone and the silence is never quite silent in this fascinating and eerie place.

Now for some practicalities. All roads lead to Rome, but in the 21st century, so too do many flight paths making the Ancient city of Rome one of the most popular tourist destinations in Europe. Unfortunately, like all incredible sights in this world, you’re not the only one who wants to see it and the Colosseum receives thousands of visitors every year, especially during peak vacation times. Buy your ticket online ahead of time to avoid queuing and save some cash. Once you’ve whet your appetite with a rich taste of Ancient Rome at the Colosseum, you’ll probably want to feast on the other attractions nearby, so it’s worth buying a combination ticket to visit the Palatine Hill and Roman Forum too.

Since 2011, it’s also possible to visit the Colosseum’s underground chambers and third tier for the very first time. It’s a one for the early birds with an 8.30am start, but this special guided tour is the most authentic and atmospheric way to explore this site. Walk in the footsteps of the doomed Gladiators by exploring the corridors and tunnels beneath the Colosseum arena then climb, breathlessly, to the highest point of this spectacular structure and look down on its epic ruins declaring triumphantly, ‘Vene, vidi, vici’ — ‘I came, I saw, I conquered.’

More information and to book: Take an in-depth guided tour of the Roman Colosseum, a visit to the archaeological site of Pompeii plus wine tasting at the foot of Mount Vesuvius on our Rome and the Amalfi Coast escorted tour.

Rome and the Amalfi Coast

Tuscany and the Italian Riviera