Dubai is the most shimmering shrine to consumerism in the Middle East. We check out the city’s most lavish super-malls, guaranteed to lure you and your credit card. 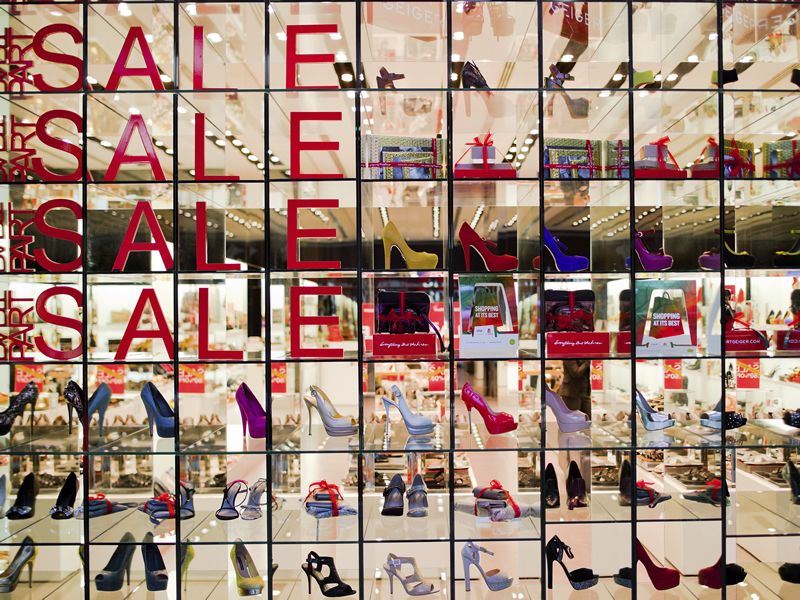 10. Dubai Outlet Mall
Where: Dubai Al-Ain Road, near Route 66 in Dubailand.
What: The only outlet concept mall in the Middle East, Dubai Outlet Mall is heaven for savvy shoppers seeking high-end designer merchandise and wardrobe basics at dramatically slashed prices. Home to over 1,200 of the world’s top fashion brands, this dream destination for bargain-hunters promises discounts of between 30%-90% on the majority of products in its 240 stores.
The best bits: Make huge savings on clobber from well-known brands (7 For All Mankind, Adidas, Guess, Armani, Calvin Klein, Tommy Hilfiger, Nike, Michael Kors, Temperley) and stock up on cut-price handbags from Valentino, Nina Ricci and D&G. Other highlights include the UAE’s first Chuck E Cheese’s - a family entertainment venue where kids can enjoy great food, arcade games, an ice-rink, a bowling alley and other fun attractions. There is also a supervised soft play area with swings, slides and ball pools for young kids on the Ground Floor near the Dome entrance. Aim to visit on a Monday when 101 of the stores offer their wares at half-price.
Opening hours: Saturday to Wednesday 10am to 10pm; Thursday to Friday 10am to midnight.

9. WAFI Mall
Where: Oud Metha Road, near to the Sheikh Zayed Road.
What: Defined by its colossal pyramid-shaped atrium roofs and ancient Egyptian-themed exteriors, the grandiose setting for 350 well-stocked stores is nothing if not kitsch. The interiors are dominated by stained glass windows, papyrus-themed columns, carvings, statues and elaborate mosaics inspired by the legacies of the Pharaohs.
The best bits: Aside from many of the world’s most revered brands (Chanel, Escada, Kitson, Givenchy, Roberto Cavalli, Jaegar, Villeroy &amp; Boch, Chopard, Links of London, Mont Blanc and more) there are also fabulous offerings from lesser-known independent boutiques. Most impressive is the Souk Khan Murjan, located in WAFI’s basement. Inspired by the ancient market of Baghdad, a labyrinth of intricate tunnels leads to an authentically-designed souk where vendors sell Arabian crafts, perfumes, carps, lamps and other curios. Other attractions include the five-star Raffles Dubai Hotel, Cleopatra’s Spa and Encounter Zone, a supervised fun-filled entertainment area for kids.
Opening hours: Saturday to Wednesday 10am to 10pm; Thursday to Friday 10am to midnight.

8. Ibn Battuta Mall
Where: Sheikh Zayed Road, close to Interchange 6 for Jebel Ali Village.
What: Named for the famed Arabic explorer who visited most of the known Islamic world in the 14th century, Ibn Battuta Mall is the world’s largest themed shopping mall. Featuring over 275 stores, 50 restaurants and a 21-screen cinema (including the UAE’s only IMAX theatre), there are six themed ‘courts’ designed to reflect the architectural style of the regions visited by Battuta: China, India, Persia, Egypt, Tunisia and Andalusia.
The best bits: Each dazzling court is individually designed to project an historical significance and cultural richness through architecture, statues, replicas and other aesthetics. Most striking is Persia Court, which houses retail stores such as Paris Gallery, H&amp;M, Forever 21 and Debenhams beneath its spectacular hand-painted dome. Other highlights include a children’s play zone, a state-of-the-art gym, an authentic Chinese garden, over 50 restaurants including 16 international food outlets and India Court, a crowd-pleaser for fashioniastas looking to bag a few designer goodies.
Opening hours: Sunday to Wednesday 10am to 10pm; Thursday to Saturday 10am to midnight.

7. Deira City Centre
Where: Near the waterfront in Deira, close to the Dubai Creek Golf Club.
What: Dubai’s first mega-mall redefined the concept of one-stop shopping when it opened in 1995; nowadays it entices shoppers with over 370 stores spread over three floors. Whilst not as glam as its newer rivals, this 115,000 square-metre retail space offers all the usual high street staples (River Island, Mango, Gap, New Look, Karen Millen) as well as one-off shops selling Arabian handicrafts, incense burners, perfumes, carpets and souvenirs.
The best bits: Still reining supreme as one of the city’s most-visited family entertainment venues, the complex offers the Magic Planet playzone, an 11-screen VOX cinema with 3,000 seats, and Bowling City, an eight-lane tenpin bowling alley with karaoke cabins, billiards and touch-screen electronic games. Anchor stores currently include Debenhams, Carrefour, Iconic, Sharaf DG, Woolworths, Virgin Megastore and Paris Gallery but development plans are in place to add more retail outlets, double the size of the food court and build an indoor rollercoaster and ice rink.
Opening hours: Sunday to Wednesday 10am to 10pm; Thursday to Saturday 10am to midnight.

6. BurJuman
Where: In the historical district of Bur Dubai
What: Offering over 300 leading high-end brands, this upscale Dubai landmark shares its 2.8 million square-feet space with a business tower, luxury hotel suites and duplex residences. Celebrated as the hippest spot for affluent and aspiring fashion fans, this four-storey mall also features over 40 restaurants and cafes where shoppers can chill out and reflect on their fashion-finding prowess.
The best bits: With one of the highest concentrations of exclusive designer labels in the city, it’s very tempting to blow your budget on a single trip. Big names such as Saks Fifth Avenue, DKNY, Paul Smith, Chanel, Dior, Louis Vuitton, Valentino, D&amp;G, Polo Ralph Lauren, Prada, Versace, Cartier and Tiffany reside with the likes of Next, Zara, New Look and Gap to present a fully-charged shopping experience in chic, laid-back surroundings. Extensions planned for 2014 include doubling the size of the food court and building a Carrefour hypermarket and a 14-screen Vox Cinema.
Opening times: Saturday to Wednesday 10am to 10pm; Thursday and Friday 10am to midnight.

5. Al Ghurair Centre
Where: Rigga Road, in the heart of Deira.
What: Previously known as Al Ghurair City, Dubai’s oldest mall boasts over 300 stores, including the city’s finest textile manufacturers (Laurent, Majestic, Louloua and Verona) who sell brightly-coloured silks and other lavish fabrics. Shops are spread over two floors and there is also an eight-screen Cineplex and plenty of food and coffee outlets.
The best bits: Whilst it is yet to complete its expansion plan to add 150 new stores and a large entertainment zone featuring an indoor rollercoaster and ice rink, the centre satisfies with international high street players such as French Connection, Levi’s, La Senza, Nine West, MEXX, Esprit, Merrell and more. The merchandising mix in this thriving retail hub is excellent; sports fans can pick up the latest from Reebok and Adidas and there plenty to please shoppers seeking reasonably-priced footwear, accessories, handbags, watches, jewellery, perfumes, home décor and cosmetics. There is also a great selection of authentic Arabic fashion; from stylish abbeyas (full-length black robes worn by Islamic women) and dishdashas (men’s garments) to shaylas (headscarves).
Opening hours: Sunday to Wednesday 10am to 10pm; Thursday 10am to midnight; Friday 2pm to midnight.

4. Dubai Marina Mall
Where: In the heart of Dubai’s Marina.
What: Overlooking one of the world’s most ambitious waterfront developments just seconds from the sparkling white sands, the Dubai Marina Mall houses an eclectic mix of 160 stores spread across four levels. The complex is yet to complete its seven-storey development Pier 7 (formerly known as Gourmet Tower) – a showcase of seven different culinary concepts, each offering superb 360 degree views of the skyline and the Arabian Gulf.
The best bits: The expansive waterfront promenade is perfect for enjoying the marina views from a wide range of al fresco restaurants and cafés including Carluccio's and Baskin Robbins. Stock up on groceries from Waitrose, spoil the kids at the Build-A-Bear Workshop, ELC, Pumpkin Patch and Gymboree and empty your wallet at Folli Follie, Sephora, Iconic, Diesel and Swatch. The Mall also features a SEGA Republic Game Zone and the UAE’s first six-screen boutique cinema featuring reclining and ergonomically-designed seats.
Opening hours: Saturday to Wednesday 10am to 10pm; Thursday to Friday 10am to midnight.

3. Dubai Festival City Mall
Where: Rising along the banks of the historic Dubai Creek, close to the airport.
What: What this waterfront complex lacks in size, it makes up for in sophistication. The setting here is decidedly upscale; from the beautiful outdoor canal to the majestic promenade lined with numerous restaurants, cafes and bistros. There is also a splendid Mediterranean-style marina where guests staying at the InterContinental Hotel can moor their yachts.
The best bits: Shoppers can stock up on sportswear, fashion, jewellery, home accessories, toys and gifts from almost 400 retailers, including Dubai’s only IKEA. Dine at Trader Vic’s, Jamie’s Italian Dubai or the Hard Rock Café and round the day off with cocktails at the InterContinental next door – the sleek bar on the top floor boasts an excellent view of the Dubai creek and skyline. Attractions include Bowling City, a 12-screen Grand Cinema complex and a Kid's Corner indoor play centre. Developments scheduled for 2016 include more shops, an open rapid river ride covering an area the size of two-and-a-half football fields and the much-hyped ‘most advanced snow play area in the region’.
Opening hours: Sunday to Wednesday 10am to 10pm; Thursday to Saturday 10am to midnight.

2. Mall of the Emirates
Where: In the heart of the city at interchange four on Sheikh Zayed Road.
What: Expect lashings of luxury at this 223,000 square-metre shopping and leisure ‘resort’ that also features a 14-screen cinema, the two-level Magic Planet playzone area, a swanky five-star Kempinski Hotel and the 500-seat Dubai Community Theatre &amp; Arts Centre (DUCTAC). Opened in 1995, this all-encompassing complex is packed with spacious shopping avenues, over 85 coffee shops and restaurants and a mammoth array of boutiques and stores, including a huge Harvey Nics.
The best bits: Usual chains (Zara, M&S, Debenhams) are interspersed with high-end players (Fendi, Missoni, Marc Jacobs, Louboutin) for blow-the-budget bliss. After you’ve browsed the racks in almost 470 retail stores, tear down the slopes at the Mall of the Emirates’ world-famous Ski Dubai. This unique and revolutionary mountain-themed snow attraction boasts an 85-metre-high indoor mountain with five slopes of varying steepness, toboggan runs, climbing towers, an ice cave and more. Spend an afternoon skiing, tobogganing, chucking snowballs and watching a colony of penguins at play.
Opening hours: Sunday to Wednesday 10am to 10pm; Thursday to Saturday 10am to midnight.

1. The Dubai Mall
Where: Sheikh Zayed Road in the centre of downtown Dubai.
What: The world’s largest and glitziest shopping complex awes with a heady mix of high street and haute couture offerings in 1,200 stores including Bloomingdales, Hamleys and the first franchise of Galeries Lafayette. Attractions include the region's first SEGA indoor theme park, an Olympic-size ice rink, an adjoining luxury 5-star hotel, a 22-screen cinema and KidZania®, an innovative children's ‘edutainment' zone.
The best bits: Most exciting for fashion darlings is the monumental 440,000 square-foot marble-floored Fashion Avenue that showcases elite fashion houses such as Chanel, Chloe, Burberry, Cavalli, Hermes and Mulberry. Other attractions include The Dubai Fountain, the world's tallest performing fountain that shoots water jets as high as 500 feet, the world’s largest indoor Gold Souk boasting 220 retailers, and the flagship store of Candylicious - a supersized sugar shack spanning over 10,000 square feet and selling every conceivable type of sweet.
Opening hours: Friday to Wednesday 10am to 10pm; Thursday to Friday 10am to 11.30pm.