I arrived in Buenos Aires during a frenzy of activity. Pope Francis had just been appointed as the 266th Pope of the Catholic Church and the city was celebrating. I was here, though, on a sporting pilgrimage. As I approached Boca Juniors’ stadium, I saw a programme seller and struck up a conversation as I bought my matchday souvenir. Juan told me this was going to be different to any European match I had ever seen. When pressed as to why, he replied it would be more passionate and much purer. When I asked about Pope Francis he seemed disinterested. 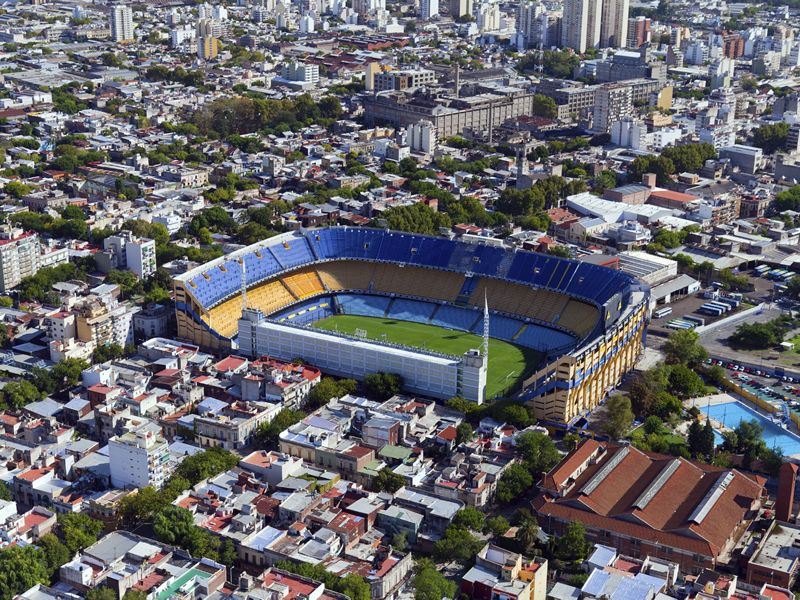 “These days not so many people believe in God. This is our cathedral,” he said, and pointed at the stadium behind him.

Walking to La Bombonera is an assault on the senses. Hunks of steak sizzle on alfresco asados, the traditional Argentine barbeque. As you enter the neighbourhood of La Boca, lurid murals in the blue and yellow of Boca Juniors pay homage to their heroes and former glories. The chattering and chanting reach feverpitch as the stadium looms above, a monument to South American culture and the physical embodiment of what’s really important here.

As the fans prepare to enter the cauldron, groups gather and begin to sing a mixture of pro Boca songs and inflammatory chants belittling the opposition. The pro Boca guys are flying flags proudly held above their heads. The inflammatory gangs have flags tied around their faces to prevent recognition and ensure anonymity. Circling all corners of the stadium are hustlers and street hawkers, selling tickets, fake tickets, replica shirts, counterfeit shirts and snacks. Armed swat teams are patrolling too, half heartedly policing the illegal vendors but more concerned with ensuring the parade of passion doesn’t spill over into a riot. To enter, you have to pass through a turnstile. Each entrance has three regulation turnstiles and one metal detector. A policeman wearing a belt strapped with enough ammunition to survive in a warzone stands guard at each entrance, picking people who appear unsavoury and ordering them to pass through the metal detector.

Boca’s hardcore fans are infamous and feared throughout South America. In a nod to their dedication they are named the 12th men. In a cunning and shameless show of gamesmanship, their seats are positioned on top of the opposition changing rooms. Before every game, they sing, shout and jump with all they’ve got. Opposition players often comment on the intimidating thunderstorm of stomps they feel raining down on the roof of their changing room pre-match, and the difficulty they encounter in hearing their manager’s teamtalk. More than any other set of fans in the world, the 12th men feel they’re part of the team and linked to their fortunes. During a cup match two seasons ago that Boca were losing, they started a stampede and stormed onto the pitch, causing the game to be abandoned. When it was replayed a fortnight later, Boca won.

I never actually heard the whistle blow at the start of the match. The cacophony of chants from the stands had consumed everything else. Boca were playing Banfield, a mid table team, and they quickly took the lead through a header from a corner. The players ran to celebrate in front of the 12th men and the stadium erupted in universal ecstasy. The deafening cries of victory sashayed around each corner and made the 40,000 capacity stadium seem infinitely bigger. An equalizing goal early in the second half quelled the singing momentarily then the crowd retaliated with an even more aggressive demonstration of their dedication. As the game reached ninety minutes, you could sense a scent of desperation in the air. But, the perpetual wall of noise succeeded and they finally scored a second goal in the second minute of injury time to snatch a victory.

As the fans spilled out of the stadium, they surfed along a noticeable wave of ecstasy. There was a togetherness and a shared sense of passionate jubilation which, when viewed alongside the sea of blue and yellow shirts, felt as pure as any religion. I felt a tap on my shoulder, turned and saw Juan, beaming with a smile that illuminated his entire face.

“A ninety-second minute goal! See, maybe there is a God.”