The Terracotta Warriors: Piecing together the legacy of China's first emperor

Peering down over the railing at the site of the well, I had to wonder what it must have been like to unearth one of the biggest archeological discoveries of our time. I remember the excitement of digging up old sherds of pottery in the garden when I was young and being adamant that I had made some great archeological find, until my mother would point out that it was just a broken old piece of common china that my grandmother probably tossed out in 1965. 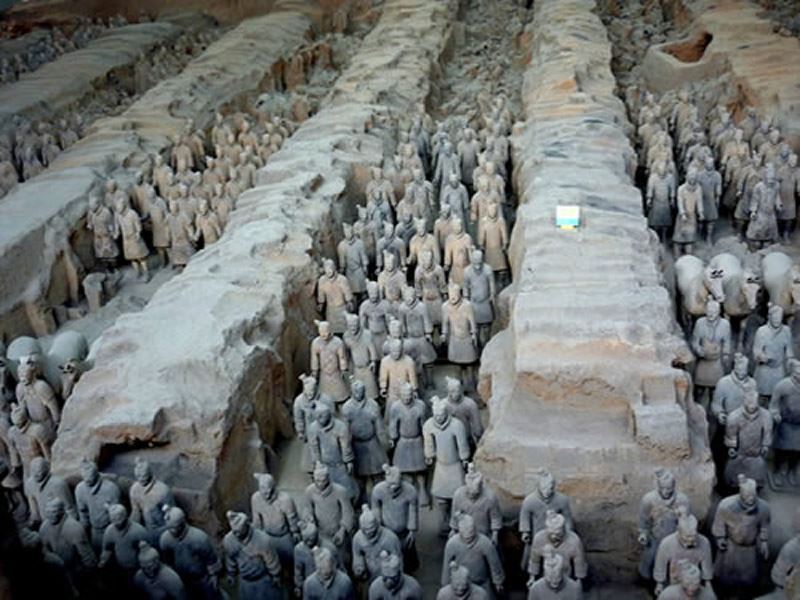 But just imagine stumbling across something hidden beneath the earth for two thousand years. Imagine unwittingly uncovering something so great as a terracotta army of around eight thousand warriors and horses. Imagine digging a well on a normal afternoon in 1974 and instead of tapping water, tapping into a chamber containing the life-size army of the First Emperor of China.

This was the life changing experience for a group of farmers 50km outside the city of Xi’an in Shaanxi province, China. Although at the time they were not to know the scale and significance of what they had stumbled upon. But I would imagine that was the last well they ever dug seeing as they are now to be found talking with visitors and signing books at the Museum of the Qin Terracotta Warriors which has since been constructed over and around their incredible discovery.

What I hadn’t realised was that archeologists haven’t really even begun excavating the entire army. There are now three separate ‘Pits’ which have been opened up on the site, but the task of reconstructing them is still in its early stages. Neither had I appreciated that the figures are largely in pieces. Broken by the collapse of the wooden roofs that covered them, ravaged by fire, flooding and looting, not to mention the test of standing on guard for 2,000 years underground.  So since their discovery, archeologists have been painstakingly putting back together again all the emperor’s horses and all of his men.

In addition to this is the ongoing problem of preservation. There are large areas of the pits which they are yet to put their trowels and brushes to because they face the problem of preserving the colour. For although we see the plain terracotta of the army today, this is not how they would have been originally. They were actually painted in bright colours but exposure to the atmosphere means the inevitable loss of this colour. Almost immediately the lacquer flakes off or fades. Within a day or two to nothing. Until they have the technology to protect them, many warriors will remain under the soil.

For any history enthusiast like myself, Xi’an is absolutely worth a visit. People don’t tend to take into account the size of China. Xi’an is a long way from Beijing and the city itself doesn’t have a lot else going for it. However to come here is worth the flight or the 12 hour train journey because you have got to see this.

I began my terracotta exploration in Pit Two. Said to be the grandest of the pits, it is hard to appreciate because it is largely unexcavated. You walk around the edge of the huge pit and see a head here and a broken leg there or half a horse disappearing into the earth. Parts of it look a little like a battle scene of fallen soldiers. There is something quite poignant about it. Within the same building they have a small museum area where they have put together examples from each rank of warrior, as well as a horse and chariot and displayed them behind glass. They also have some of the weaponry found on sight. It demonstrates the former glory of the warriors, the attention to detail in their craftsmanship, as well as giving you an insight into how they were made.

Pit Three was next and a considerably smaller pit said to be like an army headquarters. Warriors and horses stand as if in a ceremony or a meeting of the army leaders to direct the warriors, although no Commander or figure of the Emperor himself has ever been discovered.

On good advice I left the best until last. Pit One they believe contains 6,000 statues. It is here where you can find the site of the well then look out over an army of currently 1,000 infantry and cavalry all in battle formation. Even in its in-completion it is quite a sight to behold. An incredible view of the scale of Emperor Qin’s army, what must have been in life a formidable force. It is in here where I was able to watch archeologists at their meticulous work, which felt like quite a privilege.

The question that has fascinated everyone since their discovery is, why were they made? The first emperor of China, Qin Shi Huang is believed to have ordered their construction. He is said to have been obsessed with a fear of death and wanted an army to protect him in the afterlife. The army is geographically located near to what experts now believe to be the location of his tomb, so they therefore appear to be placed to guard it. It is likely that this incredible feat of manufacture is actually a replica of his real army. Every terracotta warrior is unique and was apparently instructed be so on pain of death. I did find myself looking closely at all the faces, trying to catch them out somewhere but I couldn’t. It has also been surmised that he perhaps wanted to immortalise his great power and therefore himself.

We may never have all the reasons and answers or see the Terracotta Army as it was originally. Then there is the question of the actual tomb of Qin Shi Huang which remains uncovered. I was enthralled after my visit to the museum. Although I have long given up my own fruitless endeavours in archeology, in Xi’an they will still be piecing together the legacy of the first emperor of China for many years to come, and I will continue to be fascinated. The Terracotta Warriors of Xi’an are the Eighth Wonder of the Ancient World and it is a title well deserved.