Take the cable car to the top of Table Mountain

Each and every major city across the world has that one instantly recognisable landmark that leaves the visitor awestruck; an iconic symbol that lives long in the memory of those who are fortunate enough to get a good view. In New York this is true of the Statue of Liberty, Sydney has its Opera House and you don’t want to miss Christ the Redeemer if you wind up in Rio.

Cape Town is different though. Cape Town’s landmark is a natural one, a completely unique rise in the land that offers a view that could never induce boredom, leaving those who have witnessed its majesty hungry for more. Table Mountain is one of the most accessible natural wonders. If you’re in Cape Town, you’d do well to not have a good view of the mountain. The inhabitants live under its shadow, and speak of it with a sense of pride that is easily identifiable, even if they don’t say the words themselves. Why wouldn’t you be proud of such a landmark on your doorstep? 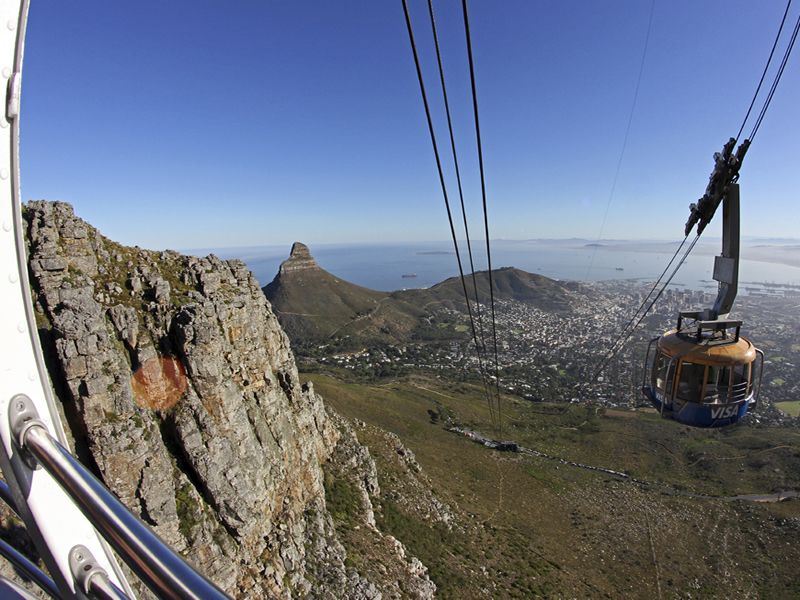 You can view Table Mountain from just about anywhere in the city’s proximity. To get to the top though, the easiest means of doing so is to take a cable car. It takes just ten minutes to drive to the cable car station on Tafelberg Road at the foot of the mountain. Despite the bad press they often receive, ordering a taxi to the station is advised if you don’t have a car. Alternatively, check with your hotel to see if they do tours or jump on a sightseeing bus. Driving yourself may seem easier up until you have to park outside the station, which can get a tad hectic during the high season, so for this reason alone I would suggest following one of the aforementioned alternatives.

Once at the station you may be concerned about the rates, but there really isn’t any need to worry. Chances are if you’ve forked out the money to get to Cape Town itself, an extra R205 (£20) for a return or R105 (£10) for a one way ticket isn’t going to hurt. What’s more, there are reductions for children under 18 years, and children under four years may use the service for free, so don’t be afraid to bring the whole family. All that’s left is to jump on the cable car. The journey lasts less than ten minutes and takes you a kilometre up the mountain’s steep slopes. The transparent interior enables you to look out across the city, as well as look smugly down at the worn out hikers on one of Table Mountain’s hiking trails.

Once at the top you’re free to explore. Depending on the weather and time of year you may need to dodge round a few tourists, though find yourself a free lookout area and defend it for long enough to soak in the incredible view. From most lookout points you’ll be able take in the important sights for the average tourist; Robben Island, Lion’s Head, Devil’s Peak, Clifton Bay and the city center itself. It’s a spectacularly beautiful city, and past experience suggests you’ll need a fair while to take it all in.

Refreshments are always close at hand. Table Mountain Café provides standard meals, both hot and cold, and a range of cold drinks. There is an accompanying gift shop too offering a range of memorabilia from your trip. Ice Cream is available from kiosks at both cable car stations. The Summit Lounge provides the dining highlight atop Table Mountain though, boasting exquisite local cuisine and panoramic views. It can also be hired out for private functions.

Before you take the cable car back down though, be sure to explore the paths that wind their way across the plateau. You have the choice of exploring on your own or on a guided tour. Wildlife is abundant, particularly the cheeky Rock Dassies that don’t seem to mind the hordes of tourists. Check the skies for the Cape Verraux’s Eagle, or marvel at the variety of fynbos vegetation, unique to the Cape.

There are just a couple of things to watch out for on your day atop Table Mountain. South-easterly winds bring about the infamous Table Cloth, cloud cover that completely shrouds the summit. Although an experience in itself walking on clouds, the lack of view is ominous, so check the weather forecast in advance. Particularly strong winds may disrupt the service, though these are infrequent and you’d be particularly unlucky to be caught out on such a day.

Table Mountain offers more than just the cable car of course. Hikers can retrace the footsteps of early climbers before the cable car was established on a variety of paths up the side of the mountain. Adrenaline junkies can abseil from a certain point at the summit too, not to be missed out by those who are up for it.

For the more relaxed amongst us though, the cable car offers the perfect means of getting to the top quickly, comfortably and all the while surrounded by the stunning views of the Cape. Every city has its landmark, but the natural uniqueness of Table Mountain easily makes it my favourite of them all. You will not be disappointed.

Further information and to book: Explore the beauty of Cape Town with our garden route self-drives, train tours and safari vacations.

Cape Town and The Garden Route