South African cuisine is one of the most eclectic, exotic and varied cuisines in the world, having been influenced by many different cultures and nations across centuries of time. It’s thanks to this rich diversity that the cuisine of South Africa today is interesting to the mind, colourful to the eye and delectable to the taste buds. 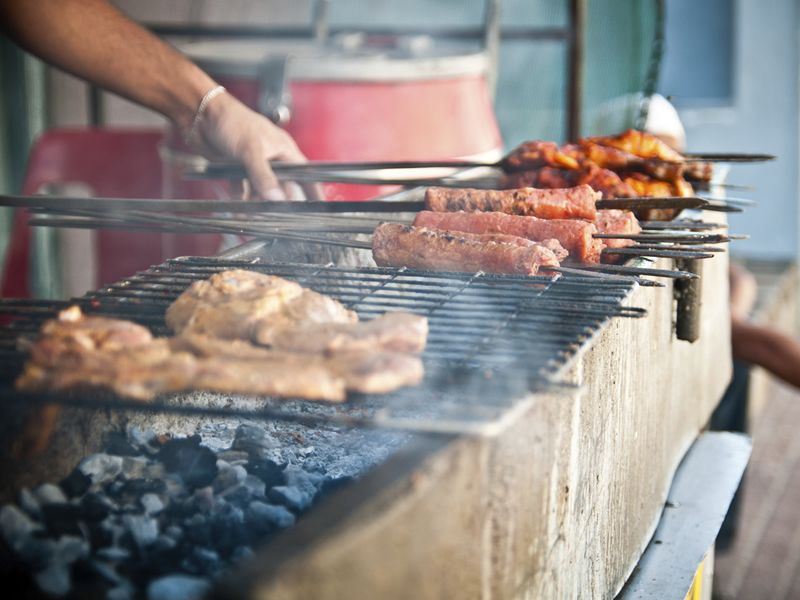 Indigenous South Africans used a broad spectrum of ingredients and methods in their home cooking. Most dishes were made from local fruits, bulbs, nuts and leaves which would be accompanied by the game they could hunt. When domestic cattle and grain crops were introduced from central Africa in 10,000 BC, the South African diet changed dramatically. Cooked grains, fermented milk (like yoghurt) and roasted or stewed beef became the primary ingredients in their dishes. And although farmers kept sheep and goats for milk and meat, communities would often organise huge hunts for the abundance of game available, making game just as common as the beef which was farmed.

South African cuisine didn’t evolve much from the beef, game, grains and milk it was based on until the Dutch invaded in the 17th century. The Dutch East India Company developed a farm on the tip of South Africa and, after finding the locals were less than willing to become slaves and farm it for them, brought in foreign slaves from Malaysia and Indonesia, who brought with them their traditional cooking methods and local spices.

Much later, slaves which were brought over from India to cut the sugar cane also carried over their cooking knowledge and exotic spices, which wove their way into the colourful tapestry that was developing into South African cuisine. The British and German immigrants which descended on the land, either in search of gold in terms of the British or in search of a new home in terms of the Germans, also influenced the culture and food with their customs, ingredients and cooking techniques.

But it’s not all about food – South Africa also has a flourishing wine industry which produces some of the world’s bestselling award-winning wines. Shortly after the Dutch colonised, the French Huguenots arrived in the late 17th century and, making the most of their viticulture and winemaking experience, blanketed the land now known as the Winelands with thick vineyards.

The mountain ranges around this part of South Africa provide the ideal microclimates to develop thriving vineyards, where a vast assortment of wines are produced. Most vineyards cultivate the Chenin Blanc grape, but Cabernet Sauvignon, Colombard, Shiraz, Sauvignon Blanc, Chardonnay, Pinotage and Merlot are all widely produced.

The vineyards in South Africa take the form of all shapes and sizes – with huge company-driven vineyards staffed by hundreds of workers which produce award-winning wines year-after-year located alongside relatively small family-run vineyards absolutely bursting with character and passion.

Many of the vineyards in the area offer wine tasting tours which you can join to see first-hand exactly how the wine is made onsite. After a leisurely and informative stroll amongst the breathtakingly beautiful vines, you’ll be treated to small samples of all the different wines produced there. Bottles are often much cheaper to buy directly from the vineyard and you know they owners are getting 100% of the money – a great feeling when you’re buying from a small-time family-run vineyard. 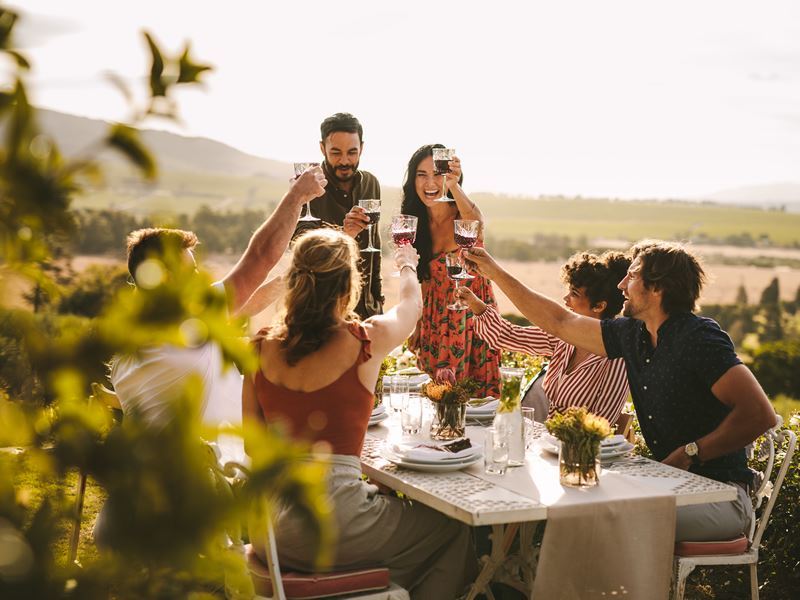 Game
Although most South Africans today eat the same meat as Europeans, you’ll find game readily available across the country. Antelope is the most common type of game meat, which comes in several varieties – kudu and impala are said to be two of the finest. Other popular game meats include warthog, wildebeest, ostrich and crocodile, which are generally cooked over an open-flame chargrill-style or left to simmer for hours in a rich, comforting stew.

Game meat is generally healthier than ordinary farmed meat because the animals eat their natural diet and are very active in the wild, therefore they develop less fat on their bodies. Not only that, but game meat also has more omega-3 fatty acids, iron and zinc, so you don’t have to feel guilty about ordering seconds!

Spices
Rarely is any food ever under-seasoned in South Africa and this is thanks to the abundance of incredible spices. The most common spices used in South African cooking are cumin, coriander, cinnamon, fennel, garam masala, turmeric, curry powder, ginger and allspice, some of which are native to the country and some of which were brought over by slaves in the 17th century. These spices don’t pack much of a punch when it comes to heat, so instead of making a dish hot and spicy, they add layers of incredible flavour.

Maize Meal
Maize meal is used to make what is perhaps the most common side dish in South Africa – “pap”. To make this, the maize meal is cooked in a saucepan with boiling water and salt until it takes on a light and fluffy porridge-like texture. Often the pap is left to ferment for several days, during which is develops a deep, tangy flavour.

Braai
Braai – pronounced so that it rhymes with “eye” – isn’t a key ingredient in South African cooking, but it is an iconic cooking technique which has been used across the country for centuries. This Afrikaans name essentially translates into English as “barbecue”, but in South Africa it means so much more than that. 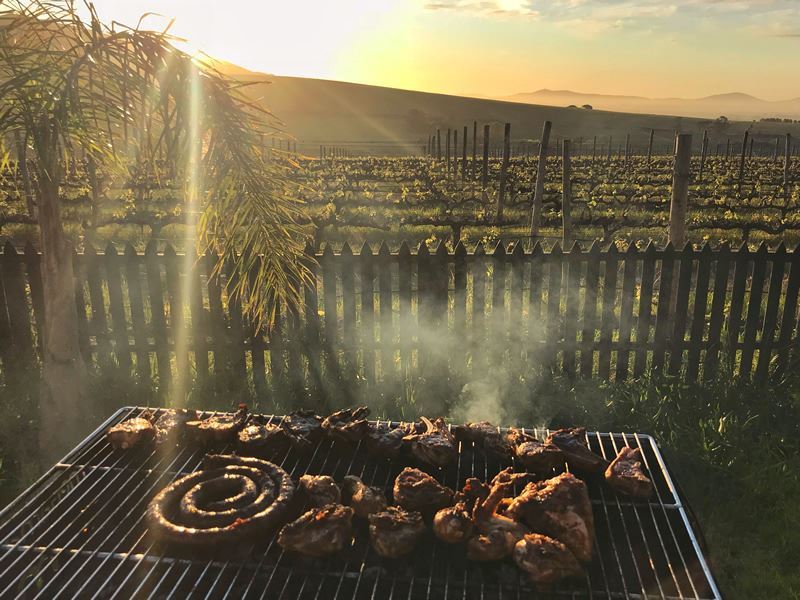 A braai is not something you do on a whim – it often involves the whole community or at least the whole family getting together, with each person bringing along some meat to cook on the braai or a side dish or salad to go with it. Common meats cooked on the braai include boerewors, kebabs, marinated chicken, lamb chops, pork chops, beef steaks and sausages, as well as fish and rock lobster in coastal regions.

Men usually take centre stage at a braai and gather around outside to cook the meat together, whilst the women prepare the side dishes and desserts indoors. This method of cooking is commonly used to celebrate major events, such as weddings, birthdays and Christmas and no expense is spared when it comes to sourcing ingredients.

Whilst you venture through South Africa on safari and rest at authentic game lodges, you could be graced with the country’s diverse dishes and unique ways of eating. Explore the lush Winelands and sip your way through a wine tour, immerse yourself in the African culture with a classic braai, or taste one of these delicious, habitual meals. 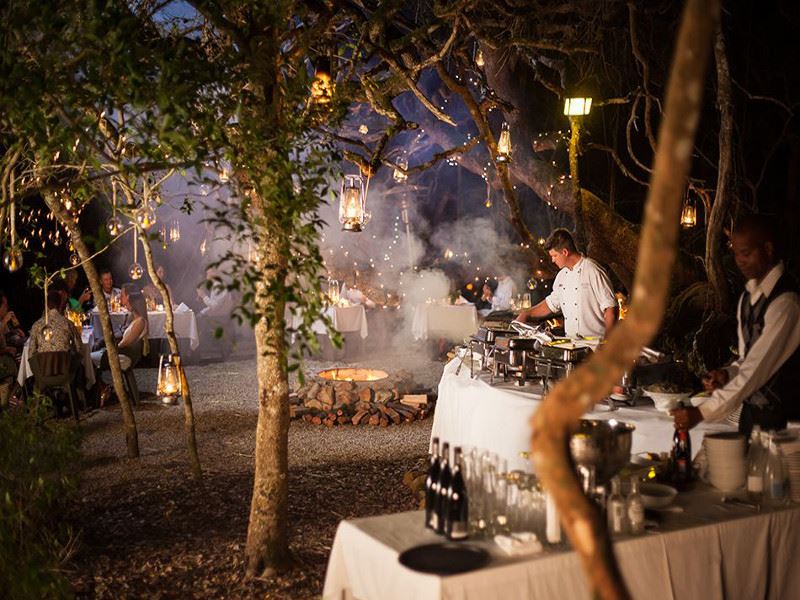 Cape Malay curry
When the Dutch and French landed in South Africa in the 17th century with slaves captured from Indonesia and Malaysia, they brought with them a plethora of spices and traditional cooking methods from their homes. Cape Malay curry is the result of these exotic ingredients and innovative cooking methods being combined with local South African ingredients. Unlike Indian curries which can pack a lot of heat, Cape Malay curry is flavoured with mild spices, giving you all the exotic tastes without any of the spice.

Biltong
Before the invention of fridges, the indigenous tribes of South African dry cured their meat to preserve it and this is how Biltong came about. This protein-packed snack is similar to American jerky and is made from thinly-sliced air-dried meat, such as beef, ostrich meat, wild boar and other types of game. With Biltong, the uncooked meat is cured in a mixture of sugar, salt, vinegar and local spices then hung out to dry. The result is a very flavourful and nutritious snack high in protein and low in fat.

Chakalaka and pap
Chakalaka and pap is one of the most common dishes served in family homes in South Africa. “Chakalaka” refers to a vegetable-based spicy curry made of tomatoes, peppers, onions, carrots, beans and local spices. It’s usually served with “Pap” – a type of porridge. But instead of being made with oats, Pap is made from maize, resulting in a starchy side dish similar to American grits. To counteract the heat from the Chakalaka, a generous dollop of Amasi (thick sour milk) is often swirled into the top before serving.

Boerewors
One look at this dish and you’ll have no trouble believing that Germans settled in South Africa. Boerewors are plump, long sausages made of minced beef and pork which are wound round on themselves to create giant sausage spirals like you see all over Germany. They’re a common staple at braais but you can also get them at many restaurants across the country. When the sausages are dried and seasoned with cloves and coriander, they transform into Droewors, which are a heartier, more filling version of biltong.

Bunny chow
Bunny chow is a takeaway with one big difference – you can eat the container! This classic dish was developed more than a century ago in the curry houses of Durban, a city in South Africa which was home to the largest Indian community outside India. To make it, a loaf of white bread is cut in half and hollowed out to make two chewy edible bowls for spicy lamb, chicken or bean curries. This innovative dish was invented as a means of getting around South Africa’s race laws which forbade Africans from eating inside Indian and Malaysian establishments.

Instructions
1.    Heat the oil in a large frying pan or saucepan over a high heat. When the oil is hot, add in the onions, garlic, ginger, curry powder, coriander, cumin, turmeric, salt, pepper, cinnamon stick, clove and bay leaf and stir for one minute, until a paste begins to develop and the smells of the spices fill the room
2.    Reduce the heat to medium and push the onions, garlic, ginger, cinnamon stick, clove and bay leaf to one side of the pan, so you’ve got a clear space
3.    Add the mutton/lamb shoulder into the clear part of the pan and cook for about 3 minutes on each side, until the shoulder is brown all over
4.    Stir the tomato paste, red wine vinegar, stock, carrot and dried apricots into the pan and cover with a lid
5.    Reduce the heat to low and leave the pan to simmer, stirring occasionally, until the meat is tender – this will take around 1hour for lamb and up to 1.5 hours for mutton
6.    Remove the cinnamon stick and bay leaf from the pan then use two forks to shred the meat and stir it into the sauce
7.    Stir the banana, apricot jam and yoghurt into the pan
8.    Serve a generous portion of the curry alongside yellow rice